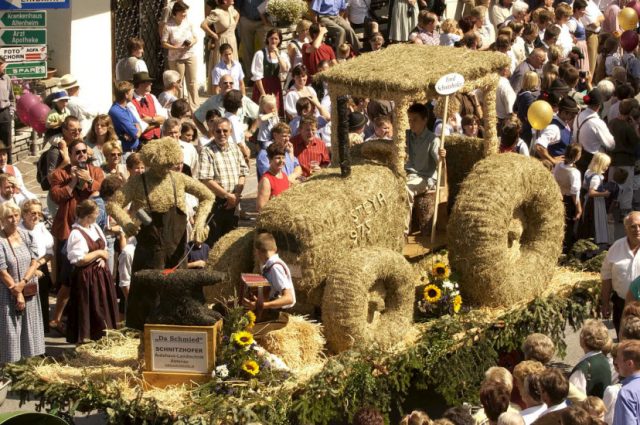 The special traditional event in the Lammertal

Every last Sunday in August, the HayART festival attracts many visitors to Annaberg-Lungötz from far beyond the borders of the Lammertal.

Countless giant hay sculptures, splendidly decorated teams of horses and beautiful hay fairies form one of the highlights of the Salzburg harvest festival.

Weeks prior to geh event, private individuals, clubs and local artists begin creating these hay figures. Built over a wooden skeleton, these frames, some of which are as much as 4 metres in height, are wrapped in hay with the utmost artistry. Finally, the figures are partially dressed up and painted.

Aside from great imagination during the planning phase, the project demands technical know-how and excellent handiwork from the artists as they gradually realize their vision. During the months of September and October, the figures can all be viewed in the region.

This website uses cookies to improve your experience while you navigate through the website. Out of these, the cookies that are categorized as necessary are stored on your browser as they are essential for the working of basic functionalities of the website. We also use third-party cookies that help us analyze and understand how you use this website. These cookies will be stored in your browser only with your consent. You also have the option to opt-out of these cookies. But opting out of some of these cookies may affect your browsing experience.
Necessary Always Enabled
Necessary cookies are absolutely essential for the website to function properly. These cookies ensure basic functionalities and security features of the website, anonymously.
Functional
Functional cookies help to perform certain functionalities like sharing the content of the website on social media platforms, collect feedbacks, and other third-party features.
Performance
Performance cookies are used to understand and analyze the key performance indexes of the website which helps in delivering a better user experience for the visitors.
Analytics
Analytical cookies are used to understand how visitors interact with the website. These cookies help provide information on metrics the number of visitors, bounce rate, traffic source, etc.
Advertisement
Advertisement cookies are used to provide visitors with relevant ads and marketing campaigns. These cookies track visitors across websites and collect information to provide customized ads.
Others
Other uncategorized cookies are those that are being analyzed and have not been classified into a category as yet.
SAVE & ACCEPT
Powered by