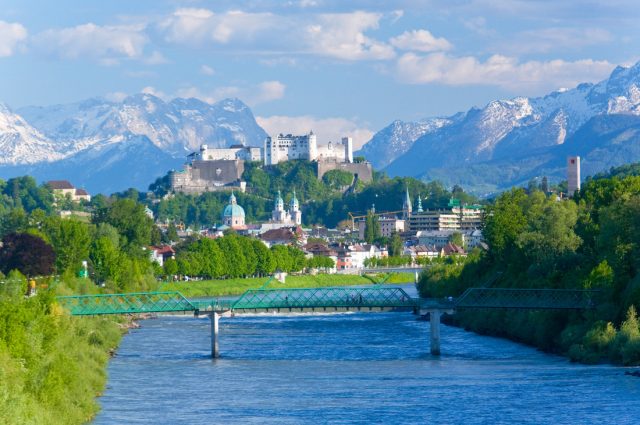 Salzburg has an abundance of attractive venues. If you’re planning to visit Salzburg  be sure to have enough time to take in the unique atmosphere and the bustle of the city.

Whether you’re coming for the culture, the Shopping, a stroll through the town, the cafés or simply to spend “a day in town” – the Old City has many charming facets.

By the way: tours of the Old City are possible by land as well as by water – a panorama ship has cruised on the Salzach since 2002, offering spectacular views of the City.

Since much of the Old City is a pedestrian zone and relatively small, it is ideal for walking and window shopping – it only takes about 20 minutes to walk from Nonntal (the southern end) to Mülln (the northern end). Those in a hurry can take a taxi whereas those with time to spare can indulge in a Fiaker ride, an oldtime horse and buggy creation, for a leisurely tour of the city..

It has greatly contributed to Salzburg’s renown and is one of the world’s most exclusive music festivals: ever since it was founded, the Salzburg Festival has been known for its exceptionally high quality of music, the commitment of its international artists and as a successful combination of the traditional and modern.

Retracing the steps of the ‘Wunderkind’ in Salzburg – Wolfgang Amadeus Mozart

Wolfgang Amadeus Mozart is still present in many places within the city of Salzburg. Evidence of the life and works of the ‘Wunderkind’ is omnipresent in the town of his birth.

some of the large places of interests and attractions of Salzburg:

This website uses cookies to improve your experience while you navigate through the website. Out of these, the cookies that are categorized as necessary are stored on your browser as they are essential for the working of basic functionalities of the website. We also use third-party cookies that help us analyze and understand how you use this website. These cookies will be stored in your browser only with your consent. You also have the option to opt-out of these cookies. But opting out of some of these cookies may affect your browsing experience.
Necessary Always Enabled
Necessary cookies are absolutely essential for the website to function properly. These cookies ensure basic functionalities and security features of the website, anonymously.
Functional
Functional cookies help to perform certain functionalities like sharing the content of the website on social media platforms, collect feedbacks, and other third-party features.
Performance
Performance cookies are used to understand and analyze the key performance indexes of the website which helps in delivering a better user experience for the visitors.
Analytics
Analytical cookies are used to understand how visitors interact with the website. These cookies help provide information on metrics the number of visitors, bounce rate, traffic source, etc.
Advertisement
Advertisement cookies are used to provide visitors with relevant ads and marketing campaigns. These cookies track visitors across websites and collect information to provide customized ads.
Others
Other uncategorized cookies are those that are being analyzed and have not been classified into a category as yet.
SAVE & ACCEPT
Powered by